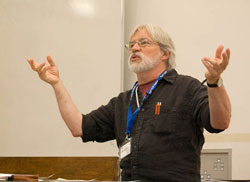 The aims of the European Democratic Education Community are:

EUDEC, today is the result of two years of co-operative planning effort by an incredibly dedicated group of students, teachers, and organisations from the UK, Germany, Denmark, Austria, Poland, the Netherlands and Finland. We are a very ambitious organisation. You will be hearing a lot more about us and about democratic education in the near future.

During this Open Session, you will have the opportunity to find out more about EUDEC, to become a member, and to be actively involved in our community. The EUDEC Council Information tables will be open all day, each day, so that you can read our literature and chat with Council members. If you would like to visit a democratic school in Europe, or to see a large state school that has been experimenting with democratic structures, to experience first hand what takes place, let us know and we will try our best to help you to do just that.

I began a democratic school near Toronto, Canada in 1971. I also founded a small democratic home school learning centre in 1983. For many years I worked in an inner city state school of 300, where over the course of five years we democratised the upper floor, six classes, with the invention of Clubhouse Democracy. This transformed the lives of students and teachers. I will be talking about that process in a workshop tomorrow.

For the last six years I have been a teacher and Curriculum Advisor at Summerhill School in England. Some of you might know about A.S. Neill and Summerhill. One of the things he said to people was that children had the free choice to go to lessons or to play. This is true but this is also a modest explanation of what Summerhill is about.

What Summerhill, what democratic education is about, is profound. It has to do with time, and the construction of authentic self through free choice of action in time.

Now, as a child chooses what to do during the day, his actions … with the world at large, with others in the community … and the reactions that follow from these actions … create a person. The child creates himself through these relationships.

If, on the other hand, someone else controls his time, and controls his actions, then the child is simply acting out, like a puppet, the designs of others on him. He is not making himself, he is being created by others, for some purposes basically unknown to him … to make him a useful economic unit, a brave soldier ready to go ‘over the top’ in the thousands, an obedient worker, a loyal citizen, a good religious follower.

This sounds like a new age deal but it’s not. When children come to democratic schools at, say 11, and they are usually out of focus. That’s an odd thing to say, and you kind of have to be there to experience it. But it’s true. They are out of focus because they aren’t themselves. They aren’t themselves because they have had their time taken away and their choice of action controlled. But over time they regain focus … they rediscover themselves. It’s quite extraordinary to see this … to see a child wonder at their own true nature appearing from within.

What we do to children with our traditional education is that outrageous. It is simply so all pervasive that it appears to be normal.

When I was a small boy I went to the Buffalo zoo … in Buffalo New York, across the border from Canada. And it was an old fashioned zoo. I remember the lion, in a rectangular cage, pacing back and forth, back and forth. I remember the neurotic monkeys, in a concrete bunker, shrieking. Well, you may not agree with the idea of zoos at all, but modern zoos are very much different than those traditional ones. They pay proper attention to natural habitat, each animal has a mini habitat that fits its natural state.

In 2008, we definitely give zoo animals better habitats to live in than we do our own children. I’m not exactly sure what this says about our culture. It can’t be good.

And let’s stop with this education as religion nonsense … with our children having to learn the proper sets of mostly irrelevant academic scripture lest they be cast into some horror of economic hell. Let’s stop using such fear, smear tactics on the good parents and children of this world.

It’s very simple, all of this. Let people be free adults by letting them be free children. Let people know what a real democratic life is by letting children practice real democracy. Trust the children and the citizens of a state to be intelligent, to make choices for themselves, to create the state they want to create. Instead of having others create it for them, through them, one dysfunctional educational year after another.

In our Clubhouse Democracy we had a booklet we used for new classes … to explain what we were all about … this bit is called The Cube … and I would read this out to 12 year olds. You might think that it would be a dangerous thing to do, to describe their habitat this way … that it might incite or depress them. It did neither … because they already knew the facts… what they were, instead, was greatly relieved … that the adults who taught them, had finally, admitted the truth.

For some reason many years ago adults decided to put children of the same age into Cubes all day for 190 days a year in order to get them ready for life. Then they put an adult into the Cube with the children and the adult’s job was to try and stay alive while he got the children ready for life.

Now the adults just didn’t put a few children in the Cubes, they crammed as many as forty into each. And it didn’t matter that the children grew bigger … for some reason the adults still gave the same sized Cubes to 6 year olds as they did to 14 year olds.

Then the adults made a big list of what they thought the children should have to know to be successful when they grew up. Often the adults would discuss and argue about this. And every few years they often changed their minds.

But one thing stayed the same. The students were never asked their opinions of anything. They weren’t asked if they thought the Cube was a good idea in the first place or, once there, what they thought they should do all day while they were in it.

The only thing the children could do to show how they felt about being in the Cube was to misbehave and take revenge on the adult who was crammed into the Cube with them.

Some students became very good at this. The adults called them troublemakers.

Actually, they were just children who didn’t like the Cube.

Some teachers invented democratic education. Adults called them a bit … odd. Actually, they were just people who thought education, and children, deserved something better.